· Registered
Joined 11 mo ago
·
969 Posts
I’ve done lots of testing in the cold weather with both my 4xe’s this winter. The behavior of the 4xe system is, if the ambient temperatures is below -12c (10f) the vehicle will not operate in electric mode. I’m not going to post why or how but the information is out there, below that temp you are in Hybrid mode with the ICE running

After I installed my winter cover in the fall I observed that the ambient temperature sensor would get “heat-soaked” from the engine bay temperatures after the ICE had ran or while the HV battery is being charged.

Up until now I just had the flap on the Mopar front cover (which is directly in front of the ambient temperature sensor) covered with tape to ensure it was as sealed off as possible from the outside air.

With this method the temp sensor would slowly drop to ambient temp or just slightly above (given driving conditions ect).

I took this idea one step further. I installed a 20w head pad (designed for a DIY handlebar warmer) directly in front of and touching the ambient temperature sensor.

I then wired it up to one of the Aux switches as I don’t want it to run all the time. For 20w I was surprised at how hot the pad got even after 2 minutes. It would probably melt things if left on and the vehicle stationary too long 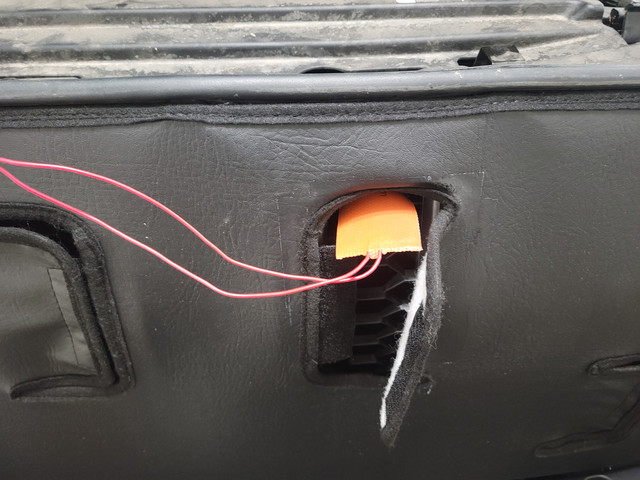 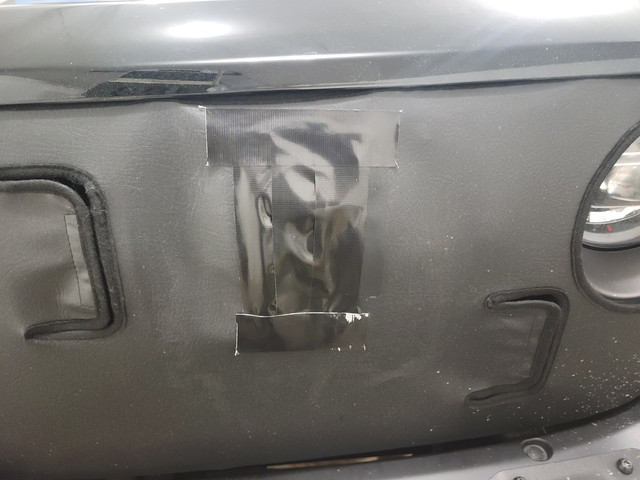 Here are 2 videos showing how fast the ambient temperature rises with it turned on.


Here is my expected use for it.

When I get in the vehicle and precondition the battery (which is usually about 2 minutes) I’ll turn the switch on and let it warm up. In the video I’ve posted it was 2 minutes for the temp to rise 22 degrees Celsius. In colder temperatures I may have to have it run longer. Once the temp gets above the -12c threshold I’ll turn it off and likely just cycle it on and off as I’m driving to keep the vehicle in electric mode.

A few theories on this.

I think 3 and 4 will be most likely but only in extremely cold temperatures (below -20c) The vehicle really doesn’t like to run in electric mode when the oil temperature is below 0c. Usually the ICE fires up for a minute or 2 and then turns off.

When its really cold “gentle” HVAC settings may not be enough to keep the windows clear of snow and ice. This may turn out to be not true if the ambient temperature (being warmer than it is) lowers the threshold for what HVAC settings trigger the ICE.

Before anyone says why I did this? Or its dangerous and I could be damaging something with the 4xe, I do it because I do (and no one else has). As for damaging things, the 4xe system is smart enough that it’s going to trigger the ICE from the 100’s of variables it uses to determine whether electric only mode will happen. Most of this winter my temperatures have been on the threshold of electric only operation so this method may allow easier operation without having the ICE start up needlessly. Also because of the behavior in extremely cold weather when the temp sensor got heat-soaked I could run in electric only, this can make that happen again.

I've now taken 2 drives in the cold and monitored what goes on, but also found some interesting behavior

While it does work it’s a bit more complicated in monitoring what the actual temperature is because the Uconnect screen isn’t very “real time” at certain points.

I then left it off(heat pad) and was looking at some other PID’s in J-Scan and OBDlink. I noted that the temperature as displayed on the Uconnect display was 12c. I then turned the vehicle off.

About 30 minutes later I went back out to the vehicle and did the same process, vehicle in RUN but not “running” and heat pad on. This time the Uconnect screen did not change in temperature from 12c. 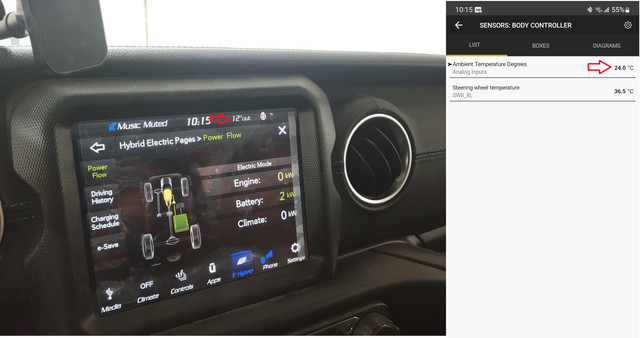 I then left the vehicle for about an hour and went back out and repeated the process again. This time I actually started the vehicle up (in electric mode) 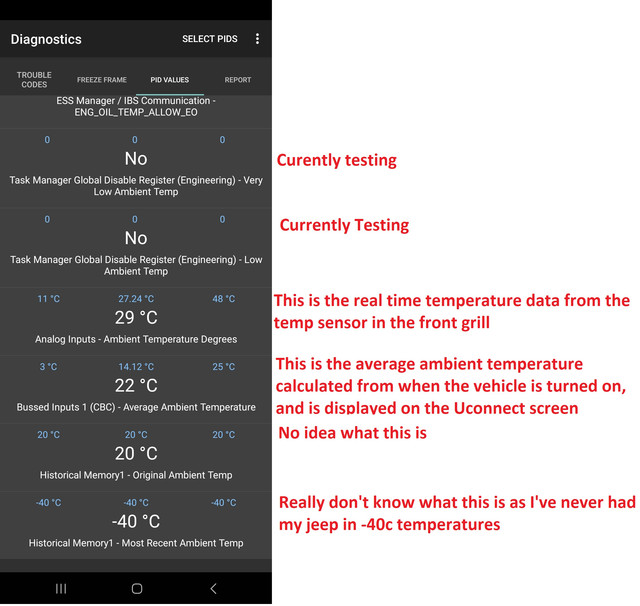 Ambient temperature in the garage was 0c at time of startup.

Ambient temperature outside was -12c

I have no idea what the historical average original ambient temp and most recent ambient temp are since neither one of those values make any sense. But I’ll keep monitoring them to see if anything changes.

The higher the vehicle speed the quicker the temp sensor drops, While it only got down as low as 14c it would only be a matter of time until that value got below -12c and then the calculated average would then drop below -12c causing the ICE to start. The real question is would I run out of battery range before that happens or not.

In city driving (speeds below 60kms/h) and in start/stop traffic the temp sensor goes up and down by a few degrees. So city driving with this mod should allow the average temperature to stay above the threshold for electric only operation.


So the TLDR, the ambient temperature outside is displayed on the Uconnect screen, but is an average of the sensor data received from the temp sensor in the grill. As long as the average temperature stays above -12c electric only mode should be possible providing other parameters are met.
D

· Registered
Joined 4 mo ago
·
176 Posts
Great info. Always love experiments like this. Any idea why they go off the ambient temperature instead of the battery pack temperature for determining when it's too cold to run in EV mode?

· Registered
Joined 11 mo ago
·
969 Posts
Maybe they do? I guess now I can test and see what might trigger the ICE if it's not the ambient temp. The battery pack is capable of being discharged and charged when it's below zero so i don't know If that's a trigger or not. I'm thinking engine oil temperature is more likely to be a trigger. I just have to wait for really cold weather now
D

Tyler-98-W68 said:
Maybe they do? I guess now I can test and see what might trigger the ICE if it's not the ambient temp. The battery pack is capable of being discharged and charged when it's below zero so i don't know If that's a trigger or not. I'm thinking engine oil temperature is more likely to be a trigger. I just have to wait for really cold weather now
Click to expand...

Now you're gonna have to put some dry ice near the ambient temp sensor to simulate a real cold day. Haha

· Registered
Joined 11 mo ago
·
969 Posts
I've done that in the summer.....doesn't do anything. I got the uconnect screen down to -36c but it still was in electric mode, so it may have been going off other sensors

Tyler-98-W68 said:
I've done that in the summer.....doesn't do anything. I got the uconnect screen down to -36c but it still was in electric mode, so it may have been going off other sensors
Click to expand...

Can you please figure out a way to force FORM tier 1?

like possibly intercept the signal from the sensor and send a different voltage to ecu, make a switch in the car?