Joined 9 mo ago
·
712 Posts
Another day another cold start except this one was very cold. (but I haven’t started it yet)

Obviously the ICE is going to start but I wanted to test the L1 ability to charge the battery and/or Condition the battery in cold weather.

*One thing to note is that the HV battery temp rose from -11c to -6c while the vehicle was still off and the battery coolant heater was NOT active, this was because I had the vehicle on logging a bunch of parameters before I plugged the Level 1 charger in *

I’ve included a picture which shows the progression of the battery temperature, coolant temp and charging current available to the HV battery. In this case a negative value indicates charge, positive indicates a draw on the battery. 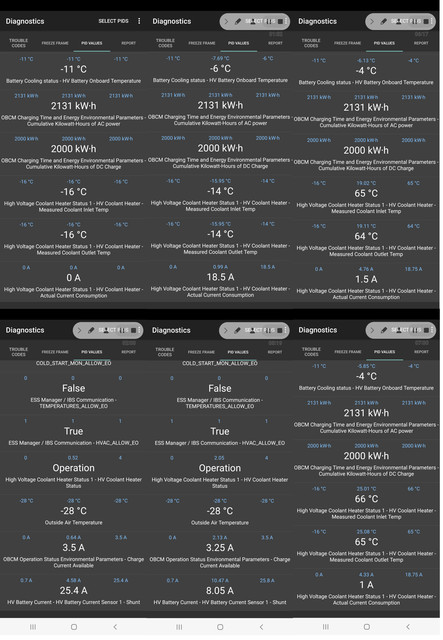 The vehicle sat outside all night. When I parked the vehicle, the HV battery was at 74%. When I went out to run these tests it was still at 74%, meaning the battery conditioning system was not active at all simply using the HV battery and nothing else.

I took a log of all the temperatures and then plugged in the L1 charger, this is where things get really interesting.

I then left the vehicle for about 40 minutes and went back out to log everything again.

Other than a few interesting situations that I’m going to test, once it gets into the extreme cold temperatures in a few months I think I’ve thoroughly figured out how the 4xe system works in the cold temps, next is to pray for FORM and work on those parameters.

Joined 3 mo ago
·
30 Posts
The 4XE won't save its own battery from death ...unless charged maybe? Seems that extreme temps could kill this battery over night.

Joined 9 mo ago
·
712 Posts
I'm fairly certain it will, I haven't got to the -30c temps yet. Having said that, the battery is located inside the vehicle and most times when parked it will be somewhat warmed up. It would take a lot more than say 12 hours for the battery to get below the -30c threshold where it in theory doesn't allow the vehicle to start.
L

Joined 6 mo ago
·
83 Posts
This is strange for me. Most lithium batteries that I know state they should not be charged if the temp is below +5 C. I would think it would warm them up more when you are running the vehicle, either via ICE or plug.

Joined 2 mo ago
·
2 Posts
So do you think it is good to remote start car about 30 minutes before you want to go for a drive while it is plugged in and then let it charge for 15 minutes after the remote start is over? I am thinking the battery will be warmer and give better range when it is very cold.

nstarkey1975 said:
So do you think it is good to remote start car about 30 minutes before you want to go for a drive while it is plugged in and then let it charge for 15 minutes after the remote start is over? I am thinking the battery will be warmer and give better range when it is very cold.
Click to expand...