Joined 9 mo ago
·
712 Posts
I made it to FORM! While I’m happy about that I’m less happy that I don’t think I’m any closer to figuring out what parameters are being used to trigger FORM to work.

The last week I figured out my 2021 Sahara has done 18 starts or trips where the engine oil did not get warm enough.

Today, It had been parked in my Garage which was @ 2c Ambient overnight. I went out this morning and plugged in the Level 1 charger to warm up the battery. At this time all PID’s for electric only operation were “TRUE”. Ambient temp outside is -16c. I started the vehicle up and was able to drive in electric mode for about 10 minutes at which point EMU came up and the HYBRID PID went to false (which is expected due to the cold weather). About 5 minutes after the ICE started and I was driving, the FORM message came across the dash and when I looked the “BURNOFF” PID was now reading “FALSE” indicating I’m in FORM. The stored messages screen also displayed FORM as well.

The HYBRID PID was showing false (due to cold temperatures)

Not that anyone is going log these PID’s and get confused but based on this behavior, it would appear my vehicle is in Step 2 of FORM and totally bypassed Step 1 because the ICE is starting up right away. 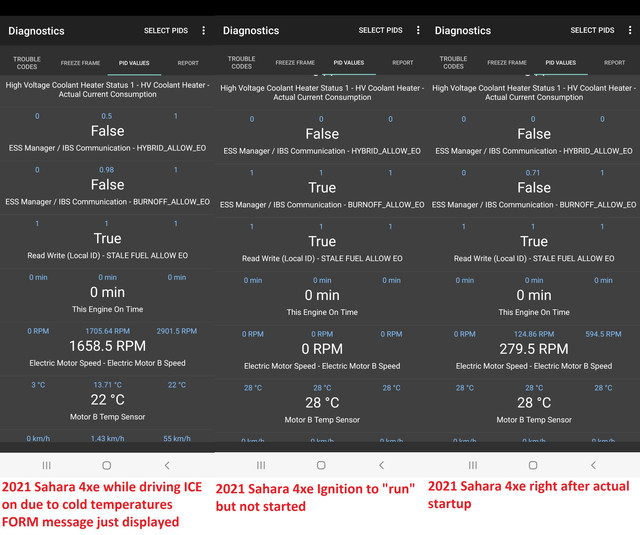 The ICE is starting up because of the cold weather and then the FORM message is being displayed because it’s in FORM. Now should the temperatures warm up enough in the next few days (or I heat my garage and get the jeep nice and warm) then it will likely operate like it’s in Step 1 of FORM (allowing electric only until the ICE starts up).

Related to that Step 1 Behavior. Should I heat my garage and keep the vehicles nice and warm, if in Step 1 of FORM, they will start in electric mode and then the ICE gets triggered due to the cold ambient temps, then FORM is displayed because the ICE kicks in, see the pattern here? Its simply a matter of time until Step 1 turns in to Step 2 because of the short trips being taken and cold ambient temperatures triggering the ICE.

After leaving the Sahara outside for a few hours, I went out to put it in my garage, Ambient temp sensor was reading -4c (even though the ambient temp was -17c the heat from the engine was causing the temp sensor to read warmer) I was able to drive in electric mode long enough to get in to my garage. At this point all fluids (battery, coolant, oil ect) were all above 0c allowing electric only operation. So it appears my 2021 Sahara is in Step 1 of FORM.

Summing it up. FORM works and FORM is normal and the behavior as described by Jeep is 100% accurate. The only thing is in extremely cold temperatures the vehicle is going to act like it’s in Step 2 of FORM (ICE at every start up).

Now with that out of the way, the discussion on what Parameters can be logged to figure out the progression of FORM? I don’t know, I absolutely don’t have the slightest clue anymore. Short of a Jeep Engineer letting us know or a technician, it appears the parameters I’ve logged tell nothing of FORM.

I’ve posted a progression in the last week of the FORM stats I’ve been monitoring all along since the beginning, and also some new PID’s but I’m not farther ahead when it comes to figuring out what it means. 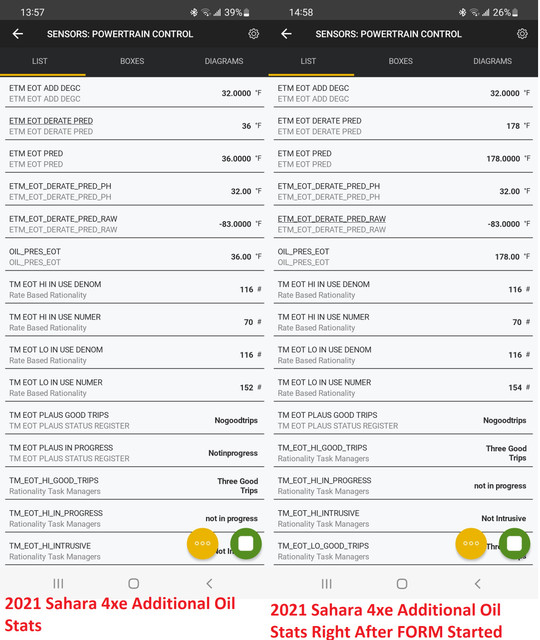 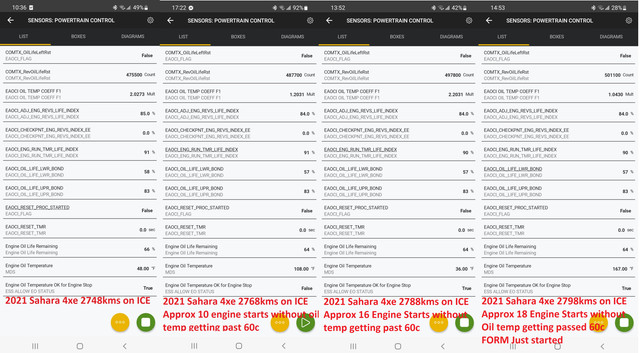 The bottom line, the vehicle goes in to FORM in the cold weather and there isn’t anything you can do about it if the temperature is cold enough. It also highlights why spending a bunch of time to get out of FORM and wasting fuel in the process isn't a good idea if the temperatures are going to be cold enough to force the ICE to run anyways.

I park in a heated garage over night and my fluid temps and ambient temp read 20c when I get in.

This past week we experienced some low temps (down to -28c one morning) I noticed that I could drive in electric up until my ambient temp sensor read~-15c. Even though the battery temp would have been higher and my fluid temps had dropped to about 10c.

The ICE will shut off at this point so long as I don’t have the heater on high heat and high fan speed (turning the fan speed down in this scenario appears to reduce load on the system to the point the ICE is not needed).

Maybe this will help give you some critical points to look for, I don’t have a PID reader.

FORM also kicks in more often in the cold mostly due to oil refresh - like you said though, this is completely normal and I really suggest people just let it run its course. Read up from last year, some people figured a way around it by just resetting the oil life and… their story didn’t end so well. Try smelling the dipstick when FORM kicks in, you may smell a bit of fuel in the mix
1 - 2 of 2 Posts
About this Discussion
1 Reply
2 Participants
Last post:
Avocado 16 d ago
Jeep Wrangler 4xe Forum
4xeForums.com - News, Reviews and Pricing on the new Jeep Wrangler 4xe. Join the Wrangler 4xe Forum, Community And Owner’s Club
Full Forum Listing
Explore Our Forums
2021+ Jeep Wrangler 4xe General Discussion Forum Jeep Grand Cherokee 4xe General Discussion Forum 2021+ Jeep Wrangler 4xe Dealers, Prices And Orders Charging, Range, and Battery Discussion New Member Introductions